Back to the Future – How Tech has Evolved versus 1985 Predictions 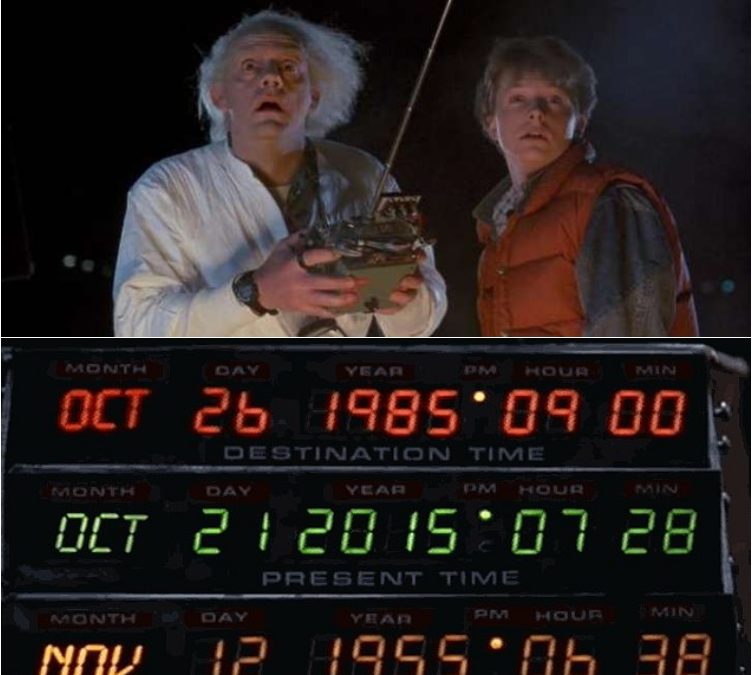 Back to the Future: How Tech has Evolved, Compared to 1985 Predictions
It is hard to believe that Back to the Future Day (October 21, 2015) is almost upon us. For many of us, the glimpse that the 1985 movie gave us of the future was one we will remember for the rest of our lives — even if that future isn’t even remotely like the one that we have. Let’s take a look at what was predicted and the reality of the situation in 2015.

We are not really sure why the futurists of 1985 thought that a jacket that sized itself and had a built in drying function would be a good idea. The closest we have to something like that in 2015 are dry-fit materials. These wonder clothes seem to be able to keep us warm in the summer by wicking away sweat and provide us ultra-thin insulation in the winter. While it might not talk to us or shrink to fit, it is an advancement over cotton T-shirts, acid washed jeans and leg warmers from the ’80s.

Doc opens the door in the middle of a rain storm, looks at his watch and a few seconds later the storm stops “Right on the button.” If only that were the case in 2015. It seems that our ability to control the weather hasn’t improved by much since Marty McFly’s day. While we have not yet perfected weather control, we do have the ability to spot troublesome weather before it strikes land. Thousands of lives have been saved by satellite technology that can see storms long before they hit, reducing the toll of events like Hurricane Sandy.

“A flying Delorean!” exclaimed no one ever, at least in real life. The flying Delorean and all the other flying cars were one of the most exciting predictions of Back to the Future for 2015. While many have tried, nobody has perfected the perfect marriage of car and flight just yet. In fact, air travel has not changed very much since the 1980s. We still need to drive to an airport, get on a plane to another airport, then rent a car or hail a taxi to get where we are going.
While we don’t yet have flying cars for the average Joe, orbital tourism might be just around the corner. Companies like X-core, Scaled Composites and Blue Horizon are all trying to get us to the edge of space. In addition, Terrafugia has created an airplane/car hybrid, but you must have a pilot’s license to fly it. Sure, it might not be in a Delorean, but it is still pretty darn cool!

Hover-boards are the unicorn of Back to the Future. Who wouldn’t love to take a ride on a Pit Bull? How else are you going to have the power to get across that pond? While we don’t quite have the vision that we were shown, some valiant attempts were made by Lexus and a kick starter run company called Hendo. They have to be run on specialized tracks and only have enough power for a few minutes of hover time. You can see Tony Hawk riding one here.

For serious technology solutions in 2015 that don’t involve flying cars or hover-boards, come take a look at what US Computer Connection has to offer your IT department today!